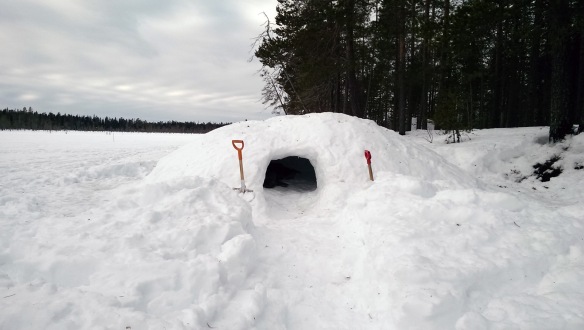 During a recent skiing trip to Kylmäluoma we made and slept in a quinzhee. A quinzhee or quinzee is a shelter made by hollowing out a pile of settled snow.

To make one, you first make a big pile of snow. This one slept 2 comfortably and was 5m or so in diameter. Don’t worry about compacting the snow as you go, just make a large heap. Compacting the snow would not only takes ages, but it also ruins the insulating properties of the snow. Once you have a large enough dome you can mildly compact the outside with shovels or skis. After this, slide in 30cm sticks, roughly 50cm apart all over the structure. These sticks are not added for structural reasons as you might think but actually act as guides when hollowing out the chamber. Once the sticks are in place leave for around an hour to harden.

Once hardened you can hollow out the chamber inside, use the sticks as guides. When hollowing don’t just throw the snow away, use it to make a wind block for the entrance, or put it on the outside of the structure to add more strength. We left a layer of snow on the floor as we were on a lake and didn’t want to be lying on ice.

Our floor was flat, and you could feel a slight draught in the night. To combat this make the sleeping areas slightly raised from the floor, causing the cold air to pool in the lower area between. This also makes the structure more comfortable, allowing you to sit on the edge of your ‘bed’. Oh, and remember to make an air hole to allow fresh oxygen can come in, that’s pretty important. Put a ski pole or stick in this hole to stop snow filling it.

After making the quinzhee I took down my other camp so my gear was ready to go the next morning. This nearly ended badly as during the time the temperature rose to +2°C and it was raining, and we were a bit worried the quinzhee might collapse in the night! Osma my building partner in crime convinced me it would be ok, so in we went for the night.

The air temp in a quinzhee is much warmer than outside. Even if it is -20 to -30°C outside it will be around 0°C inside. Although we couldn’t experience the warming qualities so much on this night, we were still treated to a silent nights sleep even though it was blowing a gale outside. It was slightly tight and a bit draughty, but surprisingly comfortable, and my first time sleeping in a snow shelter. Felt like a proper explorer.

Mikko, our tutor warned us that due to the higher temperatures the quinzhee may change in size somewhat during the night. As you can see from the pic above and below, the roof looks as if it almost caved in. I wonder what microadventures March will bring… 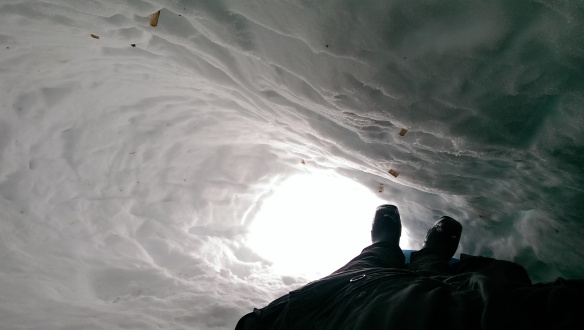 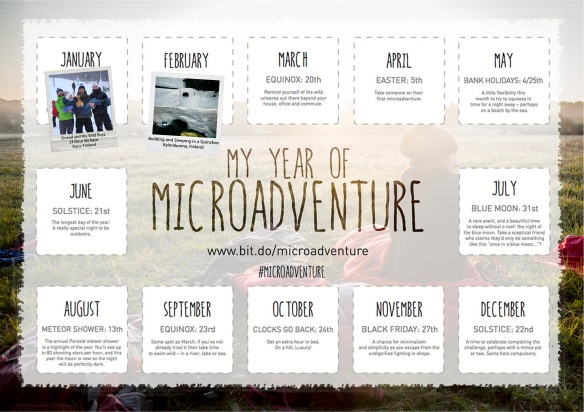 1 thought on “February Microadventure – Building and Sleeping in a Quinzhee”

This site uses Akismet to reduce spam. Learn how your comment data is processed.